The bill’s advocates had hoped that Pelosi, a longtime advocate for recognition of the Armenian genocide, would bring the bill to a floor vote by Tuesday.

Yet the bill still is lingering in the House Foreign Affairs Committee, where it has not been scheduled for a vote. ~The Chicago Tribune

This is a shame.  I had been operating on the mistaken assumption that Ankara’s mouthpieces had been making so much noise about this because the resolution was set for a successful vote.  It would seem that Madam Speaker once again has managed to disappoint even in the most symbolic things.

What You Cannot Say In Turkey 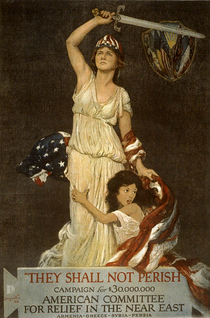 Americans From A Different Time

Activities here for the Commemoration Day were not all that remarkable, but it is a fairly small Armenian presence here on campus.  Today I had my normal Sayat Nova translating session, and then our Armenian students here at the University gathered for a screening of Assignment: Berlin, which makes up in importance as a lesson in the fate of Talaat Pasha for what it lacks in production value.  I had said yesterday that the CUP men managed to avoid facing their responsibility for what they did, which is only partly true.  They did not face the same kind of formal, internationally recognised justice that certain other genocidaires have had to face.  They were, of course, formally condemned by the Kemalists, who wanted to make clear that they had no connection to the CUP leadership, and one by one the leading party men were gunned down in the following years.  The movie mentioned above tells the story of the trial of Taalat’s assassin.

There seems to be a lack of sourcing and a big whiff of politics, say former intelligence officers.
Barbara Boland July 1, 2020