YouGov surveyed American voters to see how Rand Paul and Hillary Clinton are perceived on foreign policy (“hawk” or “dove”), and how their foreign policy views affect support for the two possible candidates in a hypothetical match-up. Here was one interesting result: 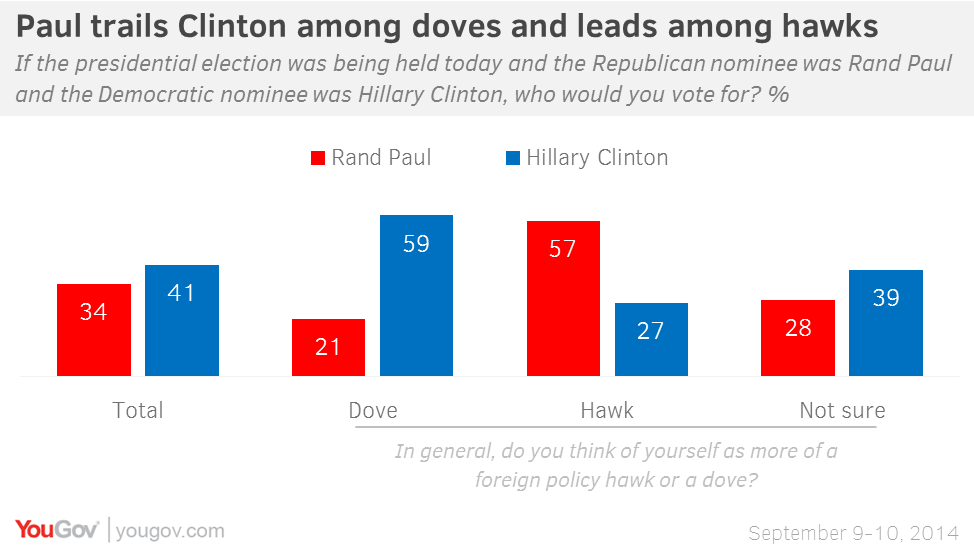 Doves clearly prefer Clinton despite the fact that a few more respondents (correctly) perceive her to be a hawk. However, Clinton also seems to benefit from the fact that 30% of respondents inexplicably perceive her as a dove, and only 27% perceive Paul that way. For all of the attention paid to Paul’s foreign policy views in political media over the last few years, his position is not very well-known or clear to the public at large, since 24% identify him as a hawk and 49% aren’t sure what to call him. Oddly enough, that might be just what Paul wants, since it gives him room to move back and forth between hawkish and dovish stances.

It is also probably the case that partisan respondents are projecting their own preferences onto the two candidates, so that dovish respondents may wrongly assume that Clinton is closer to them because they have the same party affiliation. Or it may be that both hawkish and dovish respondents are conflating partisan identification with foreign policy views, so that they back the would-be candidate of their party regardless of how they are perceived on foreign policy. Whatever the case, this survey suggests that Clinton may be able to get away with being much more hawkish than her party, and it also may mean that Paul won’t be able to poach as many dovish voters from Clinton in the event that they end up running against each other. Perhaps that would change during a campaign as the candidates’ views become more familiar to voters, but right now Clinton doesn’t seem to be paying much of a price politically within her own party for being reliably hawkish.