The senator’s speech in Miami this week seems at odds with his past warnings about dangerous heresies. 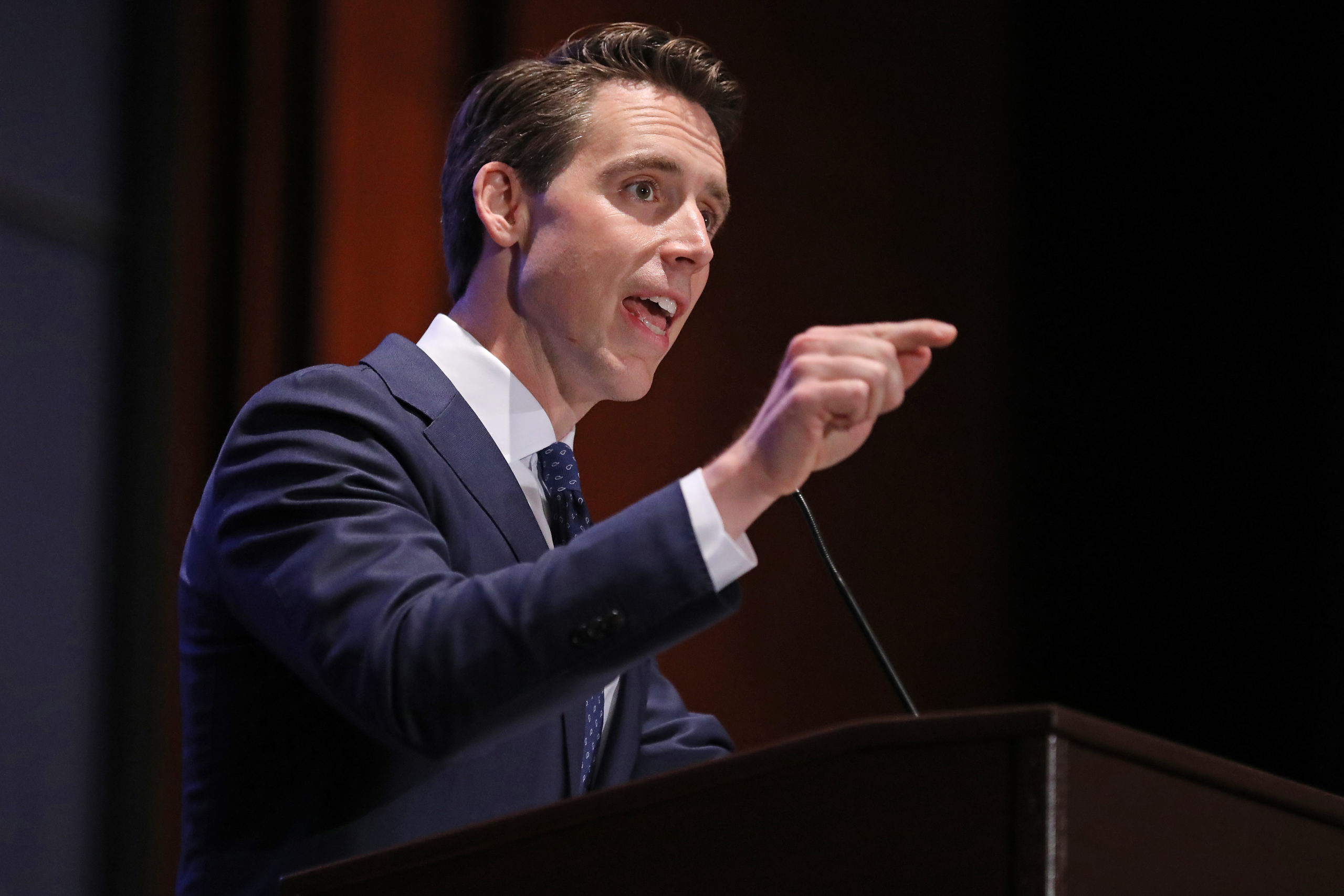 Three years ago, the junior United States senator from Missouri took aim at a fourth- and fifth-century heretic in the pages of Christianity Today. Josh Hawley’s “The Age of Pelagius,” adapted from a commencement address delivered to The King’s College in New York City, identified Pelagius’s denial of original sin and the necessity of grace as the root, or at least a precursor, of the disorder afflicting the post-Christian West.

Hawley, by then already a rising star on the still-forming New Right, gained a reputation as one of its elected intellectual heavyweights. In addition to academic and legal accomplishments, Hawley had already published Theodore Roosevelt: Preacher of Righteousness in 2008, a book which hinted at his own political agenda. “The Age of Pelagius” was true to form: smart and well-reasoned, without sacrificing that trademark Hawley hint of rhetorical fire.

In the 39 months since the essay’s publication, Hawley has continued to gain favor among those who would reimagine the GOP. And he has become a favorite villain of the #Resistance left, after he walked by some protestors on the day the 2020 election was certified.

In fact, Hawley, an Evangelical Presbyterian, is a key player in the psychodrama of the Jan. 6-panic crowd. Left-wing media commentators and their lackeys in the Biden regime have insisted that the driving force behind the events of that day was some nefarious ideology called “Christian nationalism.” There’s no evidence at all to suggest this is the case, but Hawley is a Christian, and a nationalist, and he was in the general area, and he made a vaguely approving gesture to one group of people early in the day.

It’s a flimsy case, but there may be something to the underlying fear that Hawley and his allies oppose not just liberalism but liberalism: not just the political fashions of the postwar U.S. left, but the entire arrangement of modern politics and the false anthropology on which it is founded. They have said as much.

Hawley is a favorite politician of Yoram Hazony, the brain behind the National Conservatism movement. At the third National Conservatism Conference this week in Miami, the restoration of public Christianity that has long been part of Hazony’s agenda took center stage. From two panels each on Protestantism and Catholicism to a blockbuster closing speech by Rev. Albert Mohler, president of the Southern Baptist Theological Seminary, the conference (overseen by Hazony, an Israeli Jew) was unabashed in its ecumenical Christianity.

Tucked into the middle of the program was a Monday morning keynote address by Hawley, entitled “The Biblical Revolution.” After the speech, on Tuesday in UnHerd, Park MacDougald asked, “Did Josh Hawley just call for a Christian revolution?” MacDougald’s brief column noted the left’s wild rhetoric about “an ongoing religious war against White Christian national dominance” and suggested Hawley’s NatCon address was an attempt to lean into the criticism. Subtitle: “The religious energy behind National Conservatism is no longer in the shadows.”

But in a speech running just over 28 minutes, Christ is referenced only four times—and even then only concerning the value of his “teachings,” rather than his being Son of God and Savior of the world. This would be an odd announcement of a Christian revolution.

In fact, Hawley’s entire speech was very strange—at odds not just with his own previous statements, not just with the professed philosophy of National Conservatism, but with the entire spirit animating the broad post-liberal right. “The Biblical Revolution,” surprisingly enough, was an individualist manifesto; a defense of radical liberalism; and a warning against the partisans of hierarchy and reaction.

“The ancient world,” Hawley intoned on Monday, “was a place of hierarchy. Every thing, every person, had a place—a fixed and unchanging place, bound to where they were by the order of the cosmos.” The senator is speaking here of a dangerous ideology called “conservatism.” Into this world, the Bible introduced some novel concepts: “To a world that prized order and social control, the Bible spoke of liberty. Without the Bible, there is no modernity. Without the Bible, there is no America.”

Hawley is borrowing much of his argument from Larry Siedentop, a liberal historian raised in the Dutch Calvinist church (though part of it goes back at least as far as Jacob Burckhardt, who placed the revolution in Renaissance Italy with the shaking off of the old habits of Christendom). Citing Siedentop, the senator notes that:

Strange words from the man who just three years ago pointed to Pelagius as the root of modern evils.

Stranger still is the underlying error. Hawley claims that St. Paul employs “a concept of liberty that is virtually unknown in the ancient world. The Greeks spoke of liberty from time to time; but for them and their philosophers, as you will remember, liberty meant mainly life in accordance with the order of nature, which meant hierarchy.”

“Life in accordance with the order of nature” is pagan verbiage, of course. But it is strikingly similar in substance to the traditional Christian understanding of freedom, roughly expounded by St. Augustine in argument with Pelagius and given its fullest exposition by St. Anselm half a millennium later. Freedom is the ability to pursue the good for its own sake, and its perfection consists of conformity to the Divine. It is dependent on grace, and entirely alien to the kind of heroic individual-in-history whom Hawley was trumpeting, and whom Pelagius would recognize. For the Christian, in a very real sense, order and liberty are effectively synonyms; for heretics of many stripes, they are naturally opposed.

Maybe Hawley is just overcorrecting in the face of a dangerous collectivism. He warns of enemies who “say that they want to lead us to a new era, but where they would take us is no age of Enlightenment. It is not actually someplace new at all. It is backward, to an old age of darkness and hierarchy and repression.” But backward is a good direction, and hierarchy is no evil, and Enlightenment is nothing a Christian should desire.

Or maybe he is working backwards from an abstract affinity for the common man. Populism, without the proper foundations, can turn into a kind of libertarianism—itself merely the political expression of an old theological error.

Either way, there is real danger here. Christianity is true, and so ought to be the foundation of American society and of all societies; most of what Hawley said on Monday is not true, and not recognizably Christian or American. A Biblical revolution is needed, but it ought to be founded in the Bible.

Hawley spoke of God’s calling Abraham “as an individual,” only to realize that God called Abraham as a patriarch; though he noticed the error, he did not revise his thesis. Hawley spoke of Genesis in contrast to pagan creation stories, “of God designating someone to exercise his authority and carry forward his purposes, but it’s not a king. It’s Adam and Eve, who do it on behalf of all humanity.” He then asked: “What’s the point? From the first, the Bible pictures individuals as capable of self-rule.”

There are two massive errors here. First, the God of all creation bestowing on one man dominion over the entire earth is not exactly a point for free-wheeling individualism. Second, something significant followed that act of creation—something Pelagius denied, and on that denial built his whole view of the world.

Hawley opened his speech on Monday by quoting John F. Kennedy’s inaugural address: “We dare not forget today that we are the heirs of that first revolution.” Indeed we are. It seems Senator Hawley has forgotten a great deal; he ought to be reminded of the serpent in the Garden.