Obamacare’s launch has been, if you ask Ezra Klein (but not Joan Walsh!), a disaster. Reasonably enough, the House committee with appropriate oversight responsibilities wanted to bring in an expert to “guide our oversight and review of” the Healthcare.gov debacle, even as the shutdown showdown was in full swing. Per CNBC, they chose John McAfee. McAfee […] 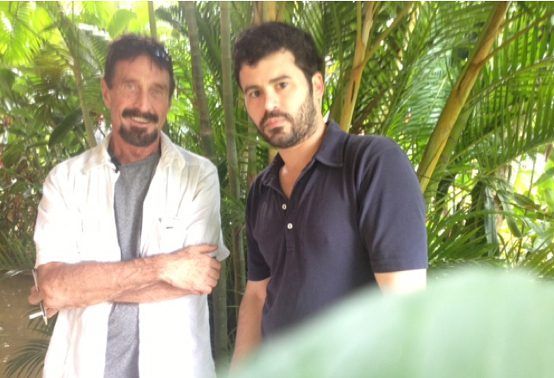 Obamacare’s launch has been, if you ask Ezra Klein (but not Joan Walsh!), a disaster.

Reasonably enough, the House committee with appropriate oversight responsibilities wanted to bring in an expert to “guide our oversight and review of” the Healthcare.gov debacle, even as the shutdown showdown was in full swing.

Per CNBC, they chose John McAfee. McAfee has many positive qualities as a website consultant, not least of which being his creation of the eponymous web security software that made him a tech giant. He also has been spending the past few years of his life living an increasingly paranoid and bizarre life in the Latin American country of Belize that included hiring gang members he thought were trying to kill him, and procuring a 17 year-old girlfriend.

Then last fall, he became a “person of interest” in the murder of his fellow American expat neighbor, and went on the run deep into the Latin American jungle. Unable to resist his own desire for attention, he allowed the rugged reporters of Vice to come down and interview him, reporters who then posted a photo from their iPhone that included the precise poolside coordinates of McAfee’s hideout, apparently in Guatemala. He was soon arrested and deported.

All this is to say, John McAfee shouldn’t be getting anywhere near the Capitol of the United States to advise members of Congress, and it’s more than a little concerning that he would be House Republicans’ go-to tech guru. For one thing, it casts doubt on the judgment of their staff. More broadly concerning, it might suggest that the GOP tech gap is even worse than suspected.

The Obama campaign has famously tight relations with the pick of the Silicon Valley litter, including close personal consultations with Google executive Eric Schmidt. Access to the best and brightest the tech industry has to offer is thought to have helped pad Obama’s comfortable margin of victory, and has been contrasted sharply with the Romney campaign’s ORCA get-out-the-vote software that crashed on, rather inconveniently, Election Day.

However, if the House GOP is reaching out to a paranoid eccentric with a questionable history with the truth for their consultation, one very well may wonder if they simply didn’t know anyone else. A source on the committee told CNBC that “In an effort to better understand the technology concerns, we reached out to a few of the experts who have been featured in media reports on the health care exchange ‘glitches.'”

In the Year of Our Lord 2013, website design and management is an enormous industry with countless companies across the country engaged in designing similar projects; there should be plenty right in Congress’s backyard that are familiar with building the projects within the arcane maze of federal contracting regulations. Moreover, this should be an industry anyone with oversight responsibility should be quite familiar enough with to rattle off half a dozen executives who would be able to provide reasoned, reliable insight.

That they went for a guy recently returned from a gun-packing jungle escape from Belize’s law enforcement just about says it all.