The Fate of France’s Jews 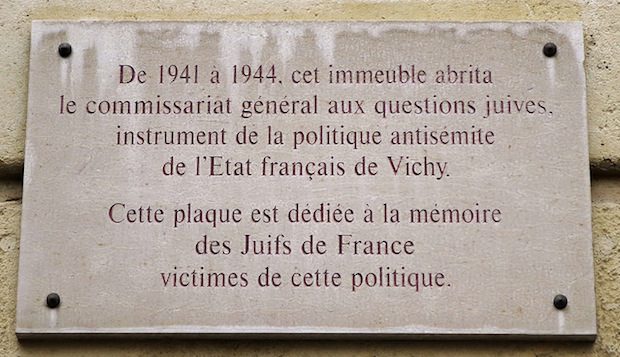 Will they put a plaque up to the victims of Islamists? (Photo: Monceau/Flickr)

So the Charlie Hebdo assassins are dead, presumably gone to Hell. Good riddance. Bastards. From The Guardian:

In two ferocious, near simultaneous assaults as dusk fell, heavily armed French elite forces shot dead the two gunmen behind Wednesday’s massacre at Charlie Hebdo and a third member of the terror cell wanted for Thursday’s murder of a young policewoman.

But while all the gunmen’s remaining hostages were freed unharmed, any relief felt was marred by the news that Amedy Coulibaly, suspected of killing police officer Clarissa Jean-Philippe in Montrouge on Thursday, had shot and killed four shoppers in the Jewish supermarket in eastern Paris that he stormed at about 1pm on Friday.

At a small printing company in Dammartin-en-Goële, 25 miles north-east of the French capital, police shot dead Chérif and Saïd Kouachi, responsible for the cold-blooded killing of 12 people – including two policemen – at the satirical magazine Charlie Hebdo’s Paris offices.

My first thought here is that Jews in Paris cannot even go to the supermarket without having to be afraid of Islamists slaughtering them. Not even to the grocery store!  Jonathan Tobin is right:

No one should blame innocent Muslims for the actions of these terrorists or seek to speak of this conflict as one between all Muslims and the West. But the real danger in Europe is not to Muslims but to a small and increasingly vulnerable Jewish population. What happened to the hostages at the market was not an isolated event but one that must be viewed as an extension of years of assaults on European Jews. A proper response to these events can’t be limited to expressions of grief about the victims or even just to support for free speech. History teaches us that when it comes to hate, Jews are the canaries in the coalmine. If Jews cannot live freely without fear of attack on the streets of the City of Light, then everyone is at risk. Stopping Islamist terror must also mean addressing the way Jew-hatred has become acceptable in European society.

The least surprising thing about today’s turn of events in Paris is that Jews are the target. Because when it comes to home grown anti-Semitism, France leads the world.

A survey last year from the European Jewish Congress and Tel Aviv University found that France had more violent anti-semitic incidents in 2013 than any other country in the world. Jews were the target of 40 per cent of all racist crimes in France in 2013 – even though they comprise less than 1 per cent of the population. Attacks on Jews have risen sevenfold since the 1990s.

No wonder Jewish emigration from France is accelerating. From being the largest Jewish community in the EU at the start of this decade, with a population of around 500,000, it is expected by Jewish community leaders to have fallen to 400,000 within a few years. That figure is thought by some to be too optimistic. Anecdotally, every French Jew I know has either already left or is working out how to leave.

And more recently synagogues have firebombed and Jewish areas attacked by mobs.

Almost of all these attacks have been carried out by Muslims.

Au revoir, les juifs. The sons of the Prophet are finishing what Vichy started. And when they have finished with the Jews and the insolent cartoonists, don’t think that will be the end of it. If France cannot, or will not, protect its Jews from its Muslims, the nation is disgraced. Again.

UPDATE: Perhaps I should say that France cannot figure out how to defend any French citizens from its radical Muslims. French Jews are on their own.

Rod – you’re approaching Andrew Sullivan-levels of over-top shrill reactions.
It is erroneous to say that France has abandoned French Jews.

What country has figured out how to protect people from Islamist terrorism? It is a real difficult problem.

Fair enough, I guess. I get so angry at the way France — a country I love second only to my own — has treated its Jews historically. The fact that Jews can’t even go to the grocery store in France without having to worry about being shot and killed by Muslims who hate them simply because they are Jews infuriates me. But then, I don’t know what France could do either, aside from shutting off all Muslim immigration, which would not solve the problem, but would keep it from getting worse. Then again, it doesn’t take many to cause chaos.