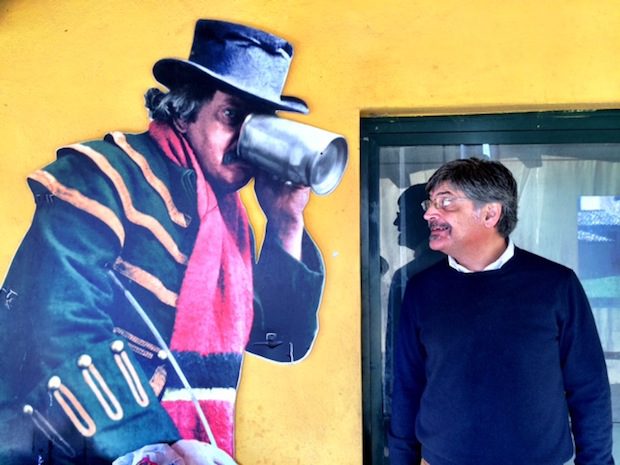 Caleb Bernacchio sends this incredibly timely essay by G.K. Chesterton, first published in 1927, about the fact that we are now living in a new Dark Age — and what to do about it. Excerpts:

A much truer way of stating the parallel is this; that history is here repeating itself, for once in a way, in connection with a certain idea, which can best be described as the idea of Sanctuary. In the Dark Ages the arts and sciences went into sanctuary. This was true then in a special and technical sense; because they went into the monastery. Because we praise the only thing that saved anything from the wreck, we are actually accused of praising the wreck. We are charged with desiring the Dark Ages, because we praise the few scattered candles that were lit to dispel the darkness. We are charged with desiring the deluge, because we are grateful to the Ark. But the immediate question here is historical rather than religious; and it is a fact attested by all historians that what culture could be found in that barbarous transition was mostly to be found in the shelter of the monastic institutions. We may regret or admire the form which that culture took in that shelter; but nobody denies the storm from which it was sheltered.

I believe we have reached the time when the family will be called upon to play the part once played by the Monastery. That is to say, there will retire into it not merely the peculiar virtues that are its own, but the crafts and creative habits which once belonged to all sorts of other people. In the old Dark Ages, it was impossible to persuade the feudal chiefs that it was more worth while to grow medicinal herbs in a small garden than to lay waste the province of an empire; that it was better to decorate the corner of a manuscript with gold-leaf than to heap up treasuries and wear crowns of gold. These men were men of action; they were hustlers; they were full of vim and pep and snap and zip. In other words, they were deaf and blind and partly mad, and rather like American millionaires. And because they were men of action, and men of the moment, all that they did has vanished from the earth like a vapour; and nothing remains out of all that period but the little pictures and the little gardens made by the pottering little monks. As nothing would convince one of the old barbarians that an herbal or a missal could be more important than a triumph and a train of slaves, so nothing could convince one of the new barbarians that a game of hide and seek can be more educative than a tennis tournament at Wimbledon, or a local tradition told by an old nurse more historic than an imperial speech at Wembley. The real national tone will have to remain for a time as a domestic tone. As religion once went into retreat, so patriotism must retire into private life. This does not mean that it will be less powerful; ultimately it may be more powerful, just as the monasteries became enormously powerful. But it is by retiring into these forts that we can outlast and wear down the invasion; it is by camping upon these islands that we can await the sinking of the flood. Just as in the Dark Ages, the world without was given up to the vainglory of mere rivalry and violence, so in this passing age the world will be given up to vulgarity and gregarious fashions and every sort of futility. It is very like the Flood; and not least in being unstable as water. Noah had a house boat which seems to have contained many other things besides the obvious household pets. And many wild birds of exotic plumage and many wild beasts of almost fabulous fantasy, many arts counted pagan and sciences counted rationalistic may come to roost or burrow in such stormy seasons in the shelter of the convent or the home.

I couldn’t have said it better myself, though heaven knows I’m trying. Read the whole thing.

There’s a reason why the absolute best Benedict Option kind of community I’ve yet seen is the Tipiloschi, Italian Catholics in the city of San Benedetto del Tronto. Their community school is the Scuola G.K. Chesterton. One of their leaders is lawyer Marco Sermarini (above), head of Italy’s G.K. Chesterton Society. None of this is a coincidence.

I’ve learned that more than one American reader of this blog is thinking of traveling to San Benedetto del Tronto to see how this community is accomplishing these great things. I cannot encourage you strongly enough to do this. It’s a revelation, and enormously encouraging.

Marco will be in the US from August 4-6, speaking at the American Chesterton Society’s annual conference, held this year at Slippery Rock State College in Slippery Rock, Pa. I strongly encourage you to go and meet him. It might change your life. I’m not kidding.