Time And The Way Things Are Done 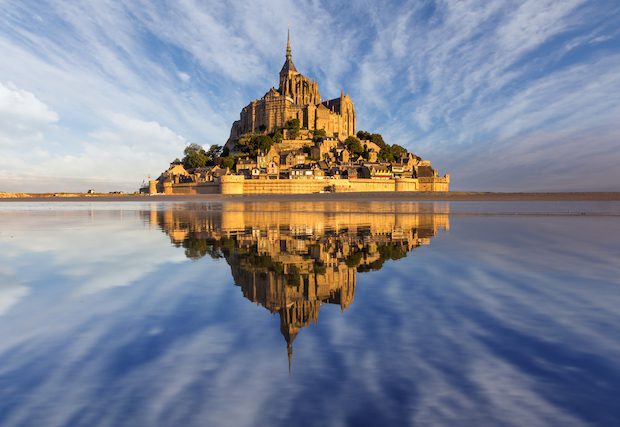 Mont-Saint-Michel, a symbol of eternity (Kanuman/Shutterstock)

In all human societies people have been troubled by time. Things come into being and pass away; but no human community has ever accepted this fact. In all places and times people have believed that there is a way into the eternal, a door out of time into a place where nothing changes and all is at rest within its being. And the key to this door is repetition. That is what sacred rituals, sacred words and sacred places provide: the prayers, chants, costumes, steps and gestures that must be repeated exactly, and for which there is no explanation other than that this is how things are done.

I’m thinking about this passage this morning as I prepare to go to church (something for which I am unusually grateful, having spent all of this past week in bed with a bad case of bronchitis). Scruton’s observation makes me feel abashed and repentant, because lately I have been unfaithful to my regular prayers. I travel across the oceans to tell Christians that if we don’t live by sacred rituals, sacred practices, and sacred routines, we are going to be disintegrated by the forces of modernity — and yet I forget to do this too.

The map out of the dark wood does us no good if we aren’t willing to walk. I needed that.

Last week I blogged about certain advantages Evangelicalism has over Catholicism (and, you could say, Orthodoxy) within modern culture. The protean nature of Evangelicalism makes it more adaptable to a protean culture. On the other hand, in light of Scruton’s point, that same protean quality could well cause us to lose a sense of the eternal, and of eternity’s presence with us in time.

This, I think, is what Terence Malick is trying to say with the symbol of Mont-St-Michel in To The Wonder. It’s why I chose Mont-St-Michel for the cover of The Benedict Option. For me, the unchanging nature of the Divine Liturgy in the Orthodox Church, and its majesty, is what always calls me back out of my wandering.

Taking Scruton’s point a bit further, I want to consider in light of our discussions here of late about the dissolution of the family, and the difficulties of courtship in our time. I believe it is true that it was easier to marry and hold families together in the past because That Is How Things Are Done. Once we realized as a society that things don’t have to be done that way, that you can marry, or not marry, that you can have kids, or not have kids, and that that would be fine — that’s when things began to fall apart. There has to be a sense that in choosing to marry and have a family, you are participating in something eternal, uniting yourself not only to God, but to all the generations that came before you, and that will come after you. Without that sacred dimension, felt as something real, it is hard to overcome the disintegrating nature of radical choice.

The key factor is religion. Everywhere in the western world, women who attend religious services on a regular basis have considerably larger families than women who say they have no religion. While regular religious attenders almost always have a birth rate at or above the replacement level of two children for each mother, women without religious affiliation have below-replacement fertility, in some cases as low as one child per woman.

This isn’t making a difference yet, because many religious children ‘convert’ to secularism. But in the long run, it is likely to be important: I project that secularisation will slow down and go into gradual reverse in Europe around 2050.

This is already largely the case in London due to religious immigration. Population trends matter because most get religion the old-fashioned way: through birth. World-denying religious fundamentalist sects, meanwhile, which are concentrated in the West, have sky-high fertility. The ultra-Orthodox Jews, Amish, Hutterites and Finnish Laestadian Lutherans average around six children per woman. Quiverfull neo-Calvinists in America, who abjure birth control, have even larger broods.

Don’t expect these groups to lose their fertility pattern with modernisation. They already live in the most modern environments, with plenty of resources and access to women’s education and contraception, actively rejecting small families.

If our society was Christian – religious but with modest birthrates – we would stand a better chance of converting members of fundamentalist sects to the mainstream. But the master trend in the West is secularisation, which paradoxically makes a fundamentalist future more likely.

Read it all. Kaufmann says that sex will go back to procreation rather than recreation, because the survival of the species depends on it.

That’s interesting. In his book Family And Civilization, the sociologist Carle C. Zimmerman says that Western European society did not begin to recover from the so-called Dark Ages until guided by the Church, peoples began to re-form strong traditional family culture, which had more or less dissolved in late Antiquity. Eventually, says Zimmerman, people learn from painful experience that there are good reasons for strong family culture.

The thing is, human beings aren’t strictly logical. We need to believe that one suffers and sacrifices not simply because it makes sense in the long run, but because by so doing, we harmonize ourselves with God, and with the eternal, transcendent order. In this City Journal piece, the scholar Kay Hymowitz discusses the collective cost of radical individualism — a cost that is ultimately paid by the lonely individual. For example:

Divorce has frayed ties between boomers and the children that they do have. Divorced fathers tend to stay close to their children in the months and years immediately following separation, but for various reasons they often drift away over time. And the younger the child at the time of the breakup, the less likely it is that fathers will continue to be involved. “Waiting till the kids have moved out,” as the gray-divorce boomlet suggests that lots of couples are doing, is not as strong protection from a kin deficit as one might expect. Gray divorce damages parents’ relationships with their adult children, too.

Get that? An unhappily married couple should stay together even after the children are gone, because divorcing — even if it stood to make them individually happier — would likely make them both lonelier, because it would fray their kinship network.

Nobody thinks about it like that, though. Nobody says, “It makes logical sense to stay married.” Most of us are too weak. We do hard things with spouses, children, and families because God expects it, and/or This Is How Things Are Done (meaning: this is in the nature of reality, a reality that exists outside of myself, and which my task is to fully inhabit). I recall conversations with friends whose parents divorced in their childhood, who say that they themselves never recovered from that. It was important for their own development to believe that This Is How Things Are Done — a mother and a father in the home — but the divorce made them understand in their bones that things might not be done that way. The world never seemed fully safe after that.

The overall point I’m trying to make is that the traditionally religious person has a stance towards life, one that orders all other phenomena in his life. This is what Scruton is talking about. But the religious person has to inhabit it, incarnate it, for it to be real — and that involves disciplining the will.

Anyway, I see now that I’m late for church. See what I mean? I am massively undisciplined, going off down rabbit holes. Off I go…