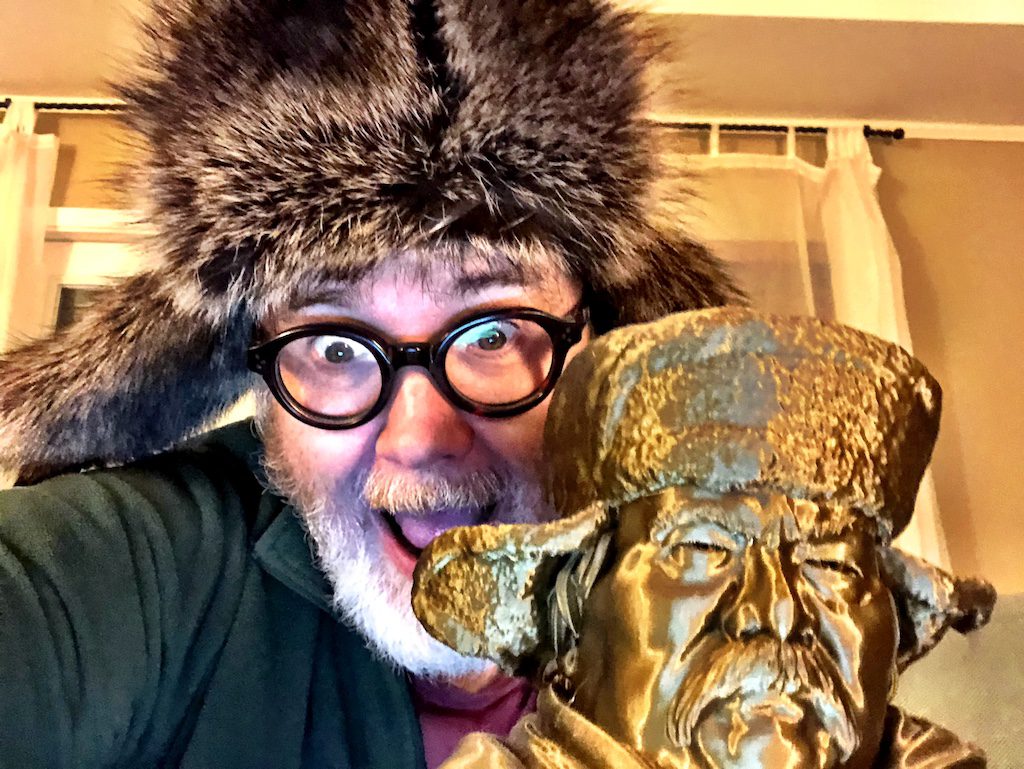 Ignatius and me, reading Comrade Walden's pensée with Prytanian delight

O Fortuna! An upward spin of her wheel has revealed to the world the Marxist Ignatius J. Reilly! His name is Daniel Walden, and he is a grad student who writes for a Christian socialist magazine. I cannot believe my good fortune here — he has written a review of Live Not By Lies, which he hated, but in his malign ardor, young Walden has given me the most enjoyable review I have ever received. There are not enough superlative words to describe the valve-opening ecstasy of reading Comrade Walden’s supple prose. Because I love you, readers, and because it has been ages since I gave you any proper Dreherbait, let me share with you this young genius’s insights. The review begins with this trigger warning:

It gets better. Or worse, depending on your point of view (mine is, of course, inclined towards hathos). Readers, behold:

I desperately wish that we lived in a world in which nobody had to pay any attention to Rod Dreher. Technically we do live in such a world: it is neither ontologically nor morally necessary either that his writings exist or that anybody afford them press coverage. But in American publishing vox denarii vox Dei is the rule, and Dreher’s considerable personal charm will always afford him a warm reception in a media landscape that anoints conservative intellectuals primarily on the basis of their ability to avoid overt racial slurs during fifteen minute television appearances. In the interest of sparing the reader’s time and blood pressure, I will state my conclusion at the outset: Rod Dreher’s Live Not By Lies: A Manual for Christian Dissidents is not worth your time or anyone else’s, because it contains nothing that has not already been said by a thousand other forgettable mediocrities, all citing the same books for the past six decades, all working each other into hysterics as brain fevers and libido remunerandi erode the ordinarily obvious distinction between social opprobrium and show trials. In light of the intellectual vacuity and the vicious spiritual poison that have animated Dreher’s political projects over the past five or so years, a reader who values their conscience should give this book as wide a berth as a firm underhand throw and deep water will allow.

When Walden’s brain reels from his literary labors, I feel certain that he makes an occasional cheese dip.

There are lots of paragraphs like that. It would be unkind of me to deny you the pleasure of reading them sequentially. Here is the emergence of a voice like none heard since I.J. Reilly himself burst onto the scene. Do you recall, from Ignatius’s diary, the Sage of Constantinople Street’s Waldenesque musings on class conflict?:

Personally, I would agitate quite adamantly if I suspected that anyone were attempting to help me upward toward the middle class. I would agitate against the bemused person who was attempting to help me upward, that is. The agitation would take the form of many protest marches complete with the traditional banners and posters, but these would say, “End the Middle Class,” “The Middle Class Must Go.” I am not above tossing a small Molotov cocktail or two, either. In addition, I would studiously avoid sitting near the middle class in lunch counters and on public transportation, maintaining the intrinsic honesty and grandeur of my being. If a middle-class white were suicidal enough to sit next to me, I imagine that I would beat him soundly about the head and shoulders with one grate hand, tossing, quite deftly, one of my Molotov cocktails into a passing bus jammed with middle-class whites with the other hand. Whether my siege were to last a month or a year, I am certain that ultimately everyone would let me alone after the total carnage and destruction of property had been evaluated.

It would be rash to speculate about Comrade Walden’s relationship to his pyloric valve, but I tell you, if he is spotted at the Prytania Theater, some New Orleanian needs to let me know. It is a delight to know that I take up so much space in this tortured visionary’s mind; surely I have to shake his hand and buy him a Lucky Dog, or ten. You must realize the fear and hatred which his Weltanschaaung instills in people — but I am not like most people. I recognize a kindred spirit.

I urge you to read the whole review. (And if you don’t get the joke, stop everything you’re doing right now and buy A Confederacy of Dunces, the greatest comic novel ever written.) You think I’m exaggerating this cat’s Ignatian qualities? Here’s how his review ends: