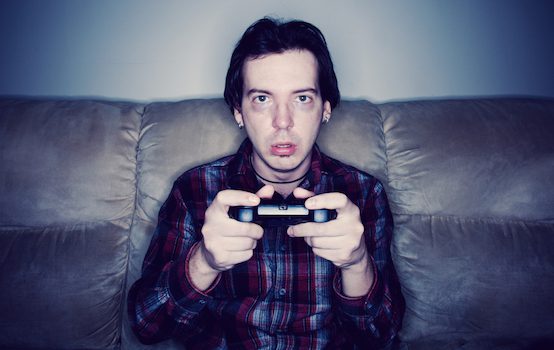 In late May, the U.S. Air Force announced its intention to release an advanced video game simulation. The theory is that the game, if successful, will be an effective recruitment tool among high school students.

If this sounds familiar, it’s because the U.S. Army already did the exact same thing with a game called “America’s Army,” launched in 2002. That one was for a while relatively popular, but as a recruitment tool there’s little doubt it failed. Indeed, it was panned early and often for claiming to offer a realistic soldiering experience while glamorizing it as an exciting and largely consequence-free adventure. The game, of course, never showed the tedium or the dark side of military service in conflict—but what proper recruitment propaganda ever does?

Not content to merely copy a failed program, the so-far untitled Air Force game seeks to combine the allure of video games with the Orwellian realities of modern “big data” applications that the government is so fond of. In this case, officials have suggested they are literally going to monitor players to spot particularly talented ones they can recruit.

As an example, imagine that the Air Force identifies a player who is particularly good at controlling the game’s simulated planes, so they offer him/her a $100,000 signing bonus to sign up for the real thing. But isn’t it possible that video game talent might not translate into real-life skills in combat? Incredibly, that seems to have been lost on the USAF.

Which is why this could be an even bigger disaster than the “America’s Army” folly—and much more expensive, too. While the Army’s gambit cost millions to design, it at least had a limited return on investment. The Air Force is prepared to throw major bonuses at good video game players on the notion that, like the 1984 movie The Last Starfighter, that’s where you’re going to find real talent.

The reason this makes sense to the Air Force (but nobody else) is because, with the advent of drone operations (i.e. remote control targeting), a number of people actually are employed in joystick-based warfare. It’s not clear whether the game will feature a drone operator mode (based in some outpost in the Nevada desert), as it seems to be focused on advanced warplanes in the heat of battle, not blowing up Pakistani wedding parties from thousands of miles away. This should come as no surprise because the life of an actual drone operator is reportedly pretty miserable, and the point of the Air Force’s game is to get kids to play so you can collect all sorts of data from them.

So far, Air Force officials aren’t providing a lot of specifics, just ambitions. They’ve also avoided estimating what the program will cost. Creating a game advanced enough to reliably attract an audience gets more expensive every year. At this point just developing a game can be counted on to cost a minimum of $100 million, to say nothing of all of the server and metadata processing costs, and the costs associated with marketing the game.

This is precisely why high-end video games don’t attempt to survive as advertising platforms. The cost of developing games has grown precipitously over the years, and players are focused on playing. They don’t want to be sold anything—not by companies, not by Uncle Sam.

This is why using a war simulation video game as a marketing tool is a terrible idea. Even in the highly unlikely event that the U.S. Air Force actually does make a popular video game, that doesn’t mean its fan base is going to be inclined toward military service, let alone suited to it. This is what happens when you combine lofty recruitment goals with a bottomless pit of taxpayer money: the military is encouraged to make reckless attempts to engage the public. The Air Force now appears to be lining up one of the most reckless of blunders yet.

Jason Ditz is news editor at Antiwar.com, a nonprofit organization dedicated to the cause of non-interventionism. His work has appeared in Forbes, the Toronto Star, the Minneapolis Star-Tribune, the Providence Journal, the Daily Caller, the American Conservative, the Washington Times, and the Detroit Free Press.