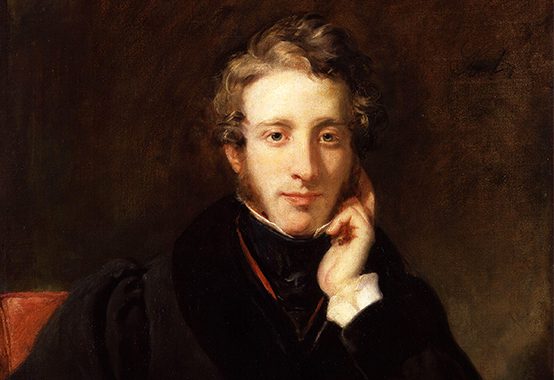 Science fiction has flooded television and Hollywood in recent decades. Our pop culture has been completely saturated by it—and it has often played a key role in our cultural and political commentary. Films and novels such as Christopher Nolan’s The Dark Knight or Suzanne Collins’s The Hunger Games touch upon issues ranging from the War on Terror to the Occupy Wall Street movement.

Yet while left-leaning science-fiction writers and directors tend to be explicit in their political allegiances, we rarely see a display of right-wing credentials in the genre. This may be understandable, given the entrenched liberal culture of Hollywood. But considering the roots of science fiction, such silence is unfortunate. After all, one of science fiction’s founding fathers was a 19th-century conservative named Edward Bulwer-Lytton.

An eminent novelist, playwright, poet, and politician in Victorian Britain, Bulwer-Lytton has been largely neglected since his death in 1873. People remember the phrases he coined—such as “it was a dark and stormy night” or “the pen is mightier than the sword”—but not the man himself. His single contribution to the science-fiction genre, The Coming Race, came in the twilight of his life after an already long and prestigious career. But then, there really was no “science-fiction genre” when The Coming Race appeared, which is what makes this book remarkable—it prefigures many of the themes that have since come to define a rather large part of our popular culture.

In the 1830s, early in his career, Bulwer-Lytton was a Radical novelist and dandy of aristocratic birth, prone to bouts of melancholia, with a strong penchant for Byron. Along with his friend Benjamin Disraeli, also a Radical novelist at the time, Bulwer-Lytton enjoyed the glamour and gossip of London high society. He wrote several novels about English society—from Pelham, which recounted the life of a society dandy and aspiring politician, to the criminal underbelly portrayed in his Newgate novels, which recounted the adventures of highwaymen and murderers. This eye for Britain’s social and cultural life was a defining feature of Bulwer-Lytton’s style and work.

Following the death of his mother in 1843, Bulwer-Lytton inherited the family title and estate. It gave him a new purpose and responsibility: the dandy of the 1830s was gone. By the 1840s, he had become a moderate Whig and a serious Victorian gentleman. Bulwer-Lytton was a committed protectionist, however, and grew increasingly disillusioned with his fellow Whigs. He eventually joined the Conservative Party in 1852, a defection facilitated by his friendship with Disraeli. This was a counterintuitive move for a rising star in Parliament: for the next two decades, the Conservatives would languish in opposition, with only brief attempts at governing. During these years, Bulwer-Lytton was Disraeli’s ally in the House of Commons.

By 1871, Bulwer-Lytton was an aged, deaf, and increasingly sick man. Years of political opposition had prevented him from ascending to the heights of political office. The world was also a very different place: as a young man Bulwer-Lytton had fought tooth and nail to prevent the rise of free trade and the growth of democracy, both of which he saw as destructive forces and vehicles for class warfare. But both had come to pass with repeal of the Corn Laws in 1846 and the Second Reform Act in 1867. Britain was no longer an exclusively agricultural, Anglican, and hierarchical society, but rather an increasingly industrialized, pluralistic, and democratic one.

It would have been easy for Bulwer-Lytton to resign himself to the fact that the political battles which had defined so much of his life were lost. Instead he published The Coming Race, anonymously, in 1871. The novel addressed new dangers he feared would await Britain through the allegorical story of a subterranean master race called the Vril-ya, whose strange abilities were made possible by the immense power of an energy source called Vril. This mysterious substance is likened to electricity or an “atmospheric magnetism” which has attained “unity in natural energic agencies.” It can influence all forms of matter by providing a power source for machinery, healing physical ailments, establishing telepathic communication, and destroying entire cities.

The novel proved incredibly popular, selling through five editions by January 1872. In retrospect we can see The Coming Race as a progenitor of the science-fiction genre, but Bulwer-Lytton was drawing upon numerous other genres he had already experimented with. He was well versed in such subjects of popular fascination as the occult and macabre, as well as the growing late Victorian obsession—shared by Sir Arthur Conan Doyle—with clairvoyance and the afterlife.

Where The Coming Race displays its innovative spirit, however, is in Bulwer-Lytton’s use of satire to blend the occult with the scientific, prophesying the dangers of utopian faith in egalitarian doctrine and technological advancement.

The year before The Coming Race was published, France had descended into chaos in the wake of the Franco-Prussian War—which witnessed the birth of the Paris Commune that inspired Karl Marx’s line about the  “dictatorship of the proletariat.” Not for the first or last time, an Englishman would look upon an episode of political violence in France and feel compelled to speak out against the dangers of misguided utopianism. For Bulwer-Lytton, the new radical doctrine threatening Western civilization in 1871 was egalitarianism.

In The Coming Race, Bulwer-Lytton chooses to tell his anti-egalitarian satire through a nameless narrator: a young gentleman from an unspecified time and place in 19th-century America, who falls down a mineshaft and discovers the Vril-ya. At first this might appear to be a counterintuitive choice of protagonist for a British aristocrat in the twilight of his life. But therein lies the interesting twist.

The narrator is as much the subject of anti-egalitarian criticism as he is the voice for anti-egalitarian commentary. Bulwer-Lytton’s dripping disdain for democracy is evident from the very beginning as the narrator recalls how his father “once ran for Congress, but was signally defeated by his tailor.” Bulwer-Lytton was baffled by liberal intellectuals’ support for democracy, which was in his view a highly anti-intellectual system. It is perhaps for this reason that he robbed his narrator of his sense of superiority by having him judged a barbarian by the Vril-ya, despite his heroic presentation of American democracy.

Egalitarian doctrine is embodied in the Vril-ya. Their society enjoys absolute equality of class and between sexes. Theirs appears to be a utopia in which crime, disease, and conflict do not exist. Leftist writers have conceived of such places in science fiction for decades, with Gene Roddenberry’s Star Trek being the most prominent example of recent times. This progressive spirit has been elevated to theological heights by the Vril-ya, who base their religion on the “conviction of a future state, more felicitous and more perfect than the present.” But the narrator soon discovers that this serene paradise is in fact one of the most civilized hellscapes to grace science fiction.

The society produced by absolute equality of outcome is ultimately sterile and monotonous, as it has traded away individuality for the common good. There is no state coercion of any kind; instead, convention and custom govern the lives of the Vril-ya thanks to their ability to self-discipline their behavior through the aid of Vril. All the Vril-ya put the common good before all other considerations, thus producing an authoritarian order in which a single magistrate rules, albeit with no formal coercive power, and citizens abide by the motto “No happiness without order, no order without authority, no authority without unity.” Language such as this calls to mind the totalitarian dystopias of George Orwell’s 1984 or Alan Moore’s V for Vendetta. Individuality and the unequal distinctions that arise from it are actively repudiated by the Vril-ya, rooted in the belief that greed for status, privilege, and fame could only lead to conflict and poverty.

Having once admired utilitarian social reformers in the 1830s, Bulwer-Lytton was aware of the many utopian arguments that claimed the state could change people’s habits, and thus their character, through measures such as public education or teetotalism. The Vril-ya represent this approach in excelsis. With Vril supplying all needs, no one indulges in alcoholic intoxication, adulterous love, devouring meat, hunting animals, or rude language. The Vril-ya’s rational morality is utterly divorced from human emotion or animal instincts—at the cost of all artistic endeavor and spiritual expression. Blandness and mediocrity define their way of life. Without competition, there is no opportunity for greatness to emerge. Bulwer-Lytton’s narrator even goes so far as to say that if you took the finest human beings from Western civilization and placed them among the Vril-ya, “in less than a year they would either die of ennui, or attempt some revolution.” Egalitarianism is portrayed as a doctrine that can only destroy all the particularities, idiosyncrasies, and joyfulness of human existence.

The Coming Race’s contribution to science fiction is obvious in its exploration of technological advancement and its effects on society. Vril is not just an agent for modeling social and political life; it is a means of technological salvation. Bulwer-Lytton’s narrator likens Vril to electricity, but Vril’s abilities will remind modern readers of technologies that came after Bulwer-Lytton’s time—specifically, Vril has the ability to “reduce to ashes within a space of time too short for me to venture to specify it, a capital twice as vast as London.” As a result, this “mutually assured destruction” led to centuries of peace among the underground peoples, allowing the Vril-ya to develop and for nations to fragment into tribal communities tied together by mutual consent instead of state-sanctioned coercion. Unwittingly, Bulwer-Lytton managed to prophesy the nuclear age.

In what has come to be a hallmark of science fiction, Bulwer-Lytton considered the dehumanizing impact that technological advancement might have on society, prefiguring authors such as H.G. Wells, who used Gothic imagery to describe the subterranean Morlocks, or Orwell and Aldous Huxley, who both crafted technocratic dystopias. These early pioneers were certainly aware of The Coming Race, and, by accident or design, they echoed the themes explored by Bulwer-Lytton.

The Vril-ya center their lives around machinery and scientific advancement, with no consideration for the soul or emotion. They augment themselves with mechanical wings for personal transportation, which calls to mind later ideas of cyborgs and transhumanism. This notion that every technological leap robs some part of our humanity has become a recurring theme in science fiction, so much so that it has become cliché—yet in many ways, it started with Bulwer-Lytton.

There is much in The Coming Race still worthwhile for a modern reader. Through the eyes of the author, this vain old English aristocrat, we can witness the passing of an age and the foreshadowing of a new one of industrialized warfare and utopian crusades. Despite its occasionally turgid prose, The Coming Race offers a gripping story that entices the reader to consider the implications of the Vril-ya’s civilization. In writing this book, Bulwer-Lytton was lamenting the loss of the England he grew up in—but also giving warning to those like us, who would face this future defined by egalitarianism and technology, threatened by the reckless pursuit of utopian bliss.