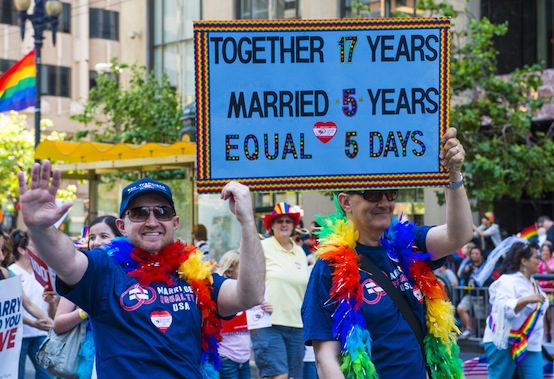 In April of 2011, The American Conservative published an article written by me entitled “The Libertarian Case Against Gay Marriage.” In addition, the magazine reported on a debate I had with gay marriage advocate Jonathan Rauch, sponsored by American University, in which I elaborated on the arguments made in my article.

I want to take the opportunity to recant—or, rather, publicly rethink—my position.

The essence of my argument against gay marriage was that it would push an activity—gay relationships—that previously existed “in the realm of freedom” into government-occupied territory. In my TAC piece I wrote:

Of course, we already have gay marriages. Just as heterosexual marriage, as an institution, preceded the invention of the state, so the homosexual version existed long before anyone thought to give it legal sanction. Extending the authority of the state into territory previously untouched by its tender ministrations, legalizing relationships that had developed and been found rewarding entirely without this imprimatur, would wreak havoc where harmony once prevailed.

I was content with this “hold the line” stance, which drew a line in the sand between the unconquered territory of gay relationships and the government-occupied territory of heterosexual marriage, until I applied it to other areas… and to my own life experience. I kept up the battle against this statist “invasion” on Twitter, where I railed against the Supreme Court decision as “a disaster for gay people”—and then I had an epiphany.

Now this may seem like a non sequitur, but think of it this way:

Smoking or otherwise ingesting marijuana is an activity—like homosexual relations—that is illegal and has been frowned upon by polite society up until the very recent past. It is still illegal under federal law, although several states have decriminalized its use. It is, in short, a province of that “unconquered territory” where State rules and regulations don’t apply. The FDA doesn’t have any standards applying to its content, production, and sale. Except in those states where it is legal—for “medicinal” or other purposes—the government doesn’t tax it. It’s part of the “realm of freedom.”

Does that mean it shouldn’t be made legal?

Of course it doesn’t.

Ironically, my pro-gay marriage epiphany had its origins in the course of reading an article in National Review opposing gay marriage by C.C. Pecknold, an associate professor of theological, social, and political thought at the Catholic University of America in Washington, and author of Christianity and Politics: A Brief Guide to the History. Pecknold writes:

One reason why marriage is not mentioned in the Constitution is that the Founders recognized that the institution of marriage was a common good of the society and prior to politics. Put differently: Constitutional silence on marriage indicates a commitment to limited government that has so far eluded our debates about marriage in this country….

The fundamental distinction on which a commitment to limited government rests is developed in conversation with ancient classical thought. Augustine was probably the first great theorist of ‘society’ as something that is ‘pre-political’ and that finds its most basic unit in the family. But as Thomas Aquinas notes, Aristotle also recognized this. The Philosopher says in the Nichomachean Ethics that man is more inclined to conjugal union than political union. Human beings are ‘social animals’ before they are “political animals.’ [Emphases added]

Pecknold goes to argue that this justifies the State’s interest in recognizing and defending marriage as an institution, but he doesn’t realize that his premise—“The political union,” he writes, “is subsequent to the prior reality”—undermines his case.

For in looking at my own life, and the lives of my gay friends, I saw that this also applied to us. That is, I looked at my own 19-year relationship with the same person, and thought: Well, yes, “the political union is subsequent to the prior reality”—but that doesn’t mean the political union is invalid (although it may not be necessary, given the preferences of the individuals involved).

While Pecknold goes on to give an ontological-mystical spin to his case against gay marriage, arguing that “this provides the West with an anthropology for understanding that future citizens come into the world through the union of a man and a woman,” this is easily separable from the rest of his line of thought, which is contained in these very powerful sentences:

When the state recognizes the nature of marriage as something prior to itself, it secures its own limits. When we acknowledge and recognize that by nature we are both social and political, we suddenly change the nature of politics. Our government no longer is tempted to define the whole of reality.

The irony here is that Pecknold’s piece tried to show that gay marriage is incompatible with the principle of limited government: ironic because he’s arguing for extending the State’s authority to prohibit a practice that existed “prior to itself.”

That homosexuality existed prior to the founding of the American Republic is beyond dispute: ever hear of Damon and Pythias, or Zeus and Ganymede? The scholar John Boswell documented the existence of homosexual unions throughout ancient and medieval times, and shows that they were given some form of legal recognition during the Roman era.

I still maintain that the form of heterosexual marriage may not function all that well in homosexual relationships: e.g. if “infidelity” is grounds for divorce, as it is in some states, then we’re going to see a lot of gays—men in particular—making appearances in divorce court. After all, we’re talking about men here. Gay marriage advocates like Jonathan Rauch who hope gay marriage will inaugurate a world in which young gay men “save” themselves for marriage are likely to be sorely disappointed. And I stick to my prediction that most gays—again, I’m thinking of gay men—won’t be tripping over themselves in a rush to get to the altar. (Gay women are another matter entirely.)

However, none of this makes the case against gay marriage as a viable option: many older gay men, tired of life in the fast lane, will no doubt take advantage of its legal benefits—e.g. establishing property rights in inheritance—and that’s all to the good.

A caveat: the victory of gay marriage advocates didn’t take long to develop into an attack on the churches, and the threat of a legal assault on all those religious institutions that “discriminate” against gays. The ACLU has already repudiated its support of the Religious Freedom Restoration Act, and we’re seeing calls for the revocation of churches’ nonprofit status. This was entirely predictable: indeed, I did predict it in my debate with Jonathan Rauch. But even I’m shocked at the swiftness of the gathering anti-clerical storm: the ACLU’s repudiation of its defense of religious liberty occurred the day after the Supreme Court decision. They’re probably already writing the legal briefs demanding that gays be allowed to recite their marriage vows in St. Patrick’s Cathedral.

Libertarians and others who uphold the principles of a free society must unequivocally defend the churches against this vicious and small-minded assault. In the present context, Christians are the new gays—pre-Stonewall, pre-Lawrence, pre-Obergefell.