Out in the Fields with God 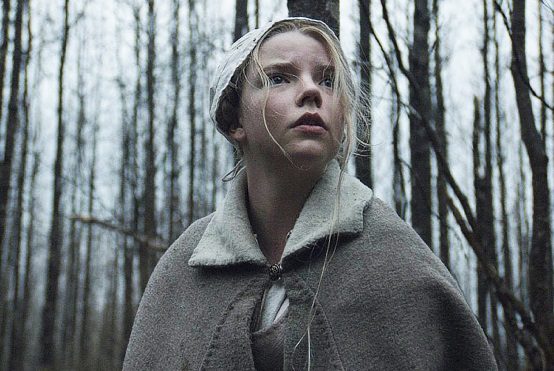 “What went we out into this wilderness to find?”

With that resounding, iconic opening line, The Witch announces that it may not be what you were expecting. Writer/director Robert Eggers’s “New-England folktale” may have been marketed as a horror movie, but horror is only one of its genres–and not the most prominent. The Witch is a family tragedy and a religious drama, and these elements are even more successful than the horror-show aspect.

That may be why the small daytime audience with whom I saw the movie were vocally disappointed with it. “I want my money back!” one groused. Imagine buying a ticket for A Nightmare on Elm Street, only to end up watching Beyond the Hills. For me The Witch was stunning, a brilliant tale that deserves to be a genre classic–but you should probably know what you’re getting into.

The Witch begins with a heresy trial, in which New England Puritans exile a dissident whose vision of God is even more uncompromising, even more hellfire-and-brimstone, than their own. William (Ralph Ineson, growly of voice and harrowed of face) takes his wife and children and leaves the settlement. The family sings hymns as their small cart rattles out into the unknown.

They settle on the edge of a vast, threatening wood. The family holds fast to its fairly terrifying faith (“I love thee marvelous well,” the father tells his son, who wants to know if the baby will go to Hell, “but it is only God who knows who is a son of Abraham and who is not”) but they simply can’t make the farm produce. The corn fails. The father begins to venture into the woods to set traps. He begins to keep secrets from his wife (the unforgettable Kate Dickie). And then, while daughter Thomasin (Anna Taylor-Joy) is playing peek-a-boo with the baby, something comes from the woods and snatches the infant away.

What follows from this awful event is supernatural—we’re shown early on that the witch is real and horrifying, a baby-killer who revels in slaughter. But it’s also the utterly natural story of a family torn apart by isolation and economic pressures. I watched most of this movie with an expression not of fear, but of horrified pity, as the family tears itself apart with little need for a witch’s help.

The Witch is pervaded by the fear of God. There are occasional references to His mercy but only as something to beg for, not something to trust in; this is the God of Hosts, not the Prince of Peace. The movie treats its characters’ religion without a hint of condescension or even disbelief: This is a movie about what it’s like to do your best to love and serve a God of wrath. It’s about the view from within that faith. The mother’s speech about the way her baby’s disappearance has brought her from blissful faith and “ravished” union with God to torturing doubt is one of the best, most nuanced expressions of religious anguish I’ve seen in cinema. And the scene in which a possibly-possessed child begins to pray and quote the Bible is flat-out shocking, totally unexpected and yet drawn from the wellsprings of Christian faith. The end credits say that the dialogue is taken from actual colonial-era documents, which may be hard on the audience, but it gives The Witch the ring of authenticity.

Almost every aesthetic choice is right. The semi-archaic dialogue, the foreboding violins and high eerie hymns; the faces of the family, made for Rembrandt. There are little touches like the fact that Thomasin has just reached menarche, or the way William’s own guilt makes him less susceptible to wild accusation. The horror imagery–a broken egg, a rearing black goat–is deployed rarely but punchily. The first quarter or so of the movie is that overcast steel-gray color we always see in movies nowadays, a depressing grimth that strikes me as a bit cliched, but after that we begin to get gorgeous, painterly scenes set in candlelight, blending domestic cares and sacred beauty. The actors are without exception convincing. The final scene is a bit standard-issue, but by that time I had been brought into the world of The Witch and didn’t need more than a few hints and allusions.

In many guides to Catholic confession you’ll find a list of possible sins, organized according to the Ten Commandments, and somewhere (I think right at the top under the First Commandment) it will offer, “I have despaired of the mercy of God.” The Witch is a story not so much about the sin of witchcraft—although its view of witchery is, let’s say, not revisionist!—but about this other, sadder sin.