The literature on Jefferson is truly enormous. One need only consult the Comprehensive Annotated Bibliography prepared by Frank Shuffelton, comprising several thousand citations, to get a sense of how extensive it is. Indeed, the Library of Congress notes that its Jefferson collection is so large that it is divided into no less than 100 categories. Certainly the most interesting, because the most enduringly relevant, of these is devoted to Jefferson’s political thought—his theory of rights and his conclusions regarding the nature of government. Among the most recent studies of this side of Jefferson is that by Luigi Marco Bassani, professor of political theory at the University of Milan. 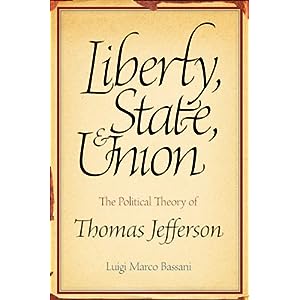 Liberty, State, and Union is a truly impressive volume. Bassani seeks to lay bare the fundamental presuppositions of Jefferson’s politics and to uncover the philosophy underlying America’s most important founding document, the Declaration of Independence. In taking up this task, Bassani confronts some 70 years of scholarship that has attempted to sever the connection between Jefferson and Lockean natural rights.

Given Jefferson’s singular importance among the nation’s Founders, it is not surprising that over the years scholars have sought to appropriate him as an early proponent of the views they themselves embraced. Thus, since the Progressive Era, Jefferson has been portrayed as a species of civic humanist, a man who was suspicious of the instrumentalities of an emerging commercial society and who believed that the nation’s virtue rested on an agrarian population active in political life. A typical instance of this interpretation is that of Charles M. Wiltze, whose Jeffersonian Tradition in American Democracy, first published in 1935, offers a picture of Jefferson as an early social democrat who, had he lived, would have embraced many of the reforms of Roosevelt’s New Deal.

Even earlier, Vernon Parrington’s Main Currents in American Thought, published in 1927, painted Jefferson as a proto-socialist who distrusted industry and everything that followed in its wake, a staunch opponent of the capitalist society that was emerging in the Anglo-British world in the 18th century. This Progressivist interpretation clashed head on with the then prevailing view of Jefferson as a classical liberal. Parrington’s essay had the effect of dividing Jefferson scholarship into competing camps that persist to this day. Some historians continue to view Jefferson as a Lockean liberal who distrusted government and subscribed to the strictest limits on the actions of the civil magistrate; others regard him as an agrarian with socialist leanings who only adhered to the principles of private property so far as they served certain political ends.

Perhaps the most egregious examples of invoking Jefferson for purely transient political purposes are the inscriptions on the Jefferson Memorial in Washington, D.C. Planned and built during the administration of Franklin D. Roosevelt, the walls of the memorial are adorned with quotations from Jefferson’s writings, many of which suggest that Jefferson advocated positions consistent with the aims of the New Deal—with which he would, in fact, have had little sympathy. Thus, Jefferson’s admonition that an educated electorate was essential if liberty were to be preserved is transmuted into a call for universal public education. And his caution that man, as he advances in his understanding of the world, must accompany his greater enlightenment with changes in his social institutions becomes a justification for a new theory of government in keeping with the social-democratic principles that animated the New Deal.

Bassani’s conclusions are in direct contrast to those of the majority of today’s historians, who have argued that Jefferson distrusted commerce and would have supported legislation to provide for a more equitable distribution of property. Bassani notes at the start that “far from being a radical democratic theorist who made some concessions in the sphere of the rights of the individual, Jefferson was a classical liberal who believed that individuals were the best guardians of their own liberties and natural rights.”

In a meticulously argued and thoroughly convincing analysis of Jefferson views, which remained essentially unchanged until his death in 1826, Bassani’s monograph concludes that there is no merit to the position that Jefferson was prepared to compromise his attachment to the Lockean notion that the right of property was inalienable if doing so resulted in eliminating inequalities in landholding. Contrast this with Wiltze, who at one point argues that for Jefferson “the state is a whole, of which the component individuals are parts, and the property rights conceded to each are conditional on their compatibility with the good of the whole.” One need hardly add that what follows from Wiltze’s claim is that the only arbiter of this compatibility is the government, one of whose functions is to maximize social good by involving itself in the distribution of wealth.

Bassani presents a forceful argument that Jefferson remained a firm believer in the inviolability of property throughout his life and did not draw a distinction between “human rights” on the one hand and property rights on the other. At no point did Jefferson ever defend the redistribution of property. Certainly his support for the confiscation of the estates held by Tories can hardly be considered an example of this, and he explicitly reaffirmed the unassailability of property rights in his Second Inaugural. That Bassani is correct in his description of Jefferson is vouchsafed by Jefferson’s justly famous words from his First Inaugural, which again deserve quotation: “a wise and frugal Government, which shall restrain men from injuring one another, shall leave them otherwise free to regulate their own pursuits of industry and improvement, and shall not take from the mouth of labor the bread it has earned. This is the sum of good government, and this is necessary to close the circle of our felicities.”

Yet Bassani’s characterization of Jefferson as a strict constructionist in some way contradicts the conclusions of other libertarian historians who are prepared to accept the contention that Jefferson’s earlier views underwent a shift in favor of more extensive government following his sojourn in France. They point to his purchase of Louisiana as a clear example of his exceeding the powers of the presidency stipulated in the Constitution. This judgment, however, strikes me as somewhat too severe given the context of the time. After all, Jefferson was by no means alone among the principal members of the Democratic-Republican Party in supporting the purchase. Indeed, it is important to keep in mind that the treaty’s major opposition, employing strict constructionist arguments, came from the Federalists, the same party responsible for passage of the clearly unconstitutional Alien and Sedition Acts. The Democratic-Republicans had overwhelming control of both the House and the Senate when the purchase was approved, the vote in the Senate being 24 to seven. Even the House, whose members had far greater reservations, ended up supporting the treaty, albeit by the narrow vote of 59 to 57.

More troublesome for Bassani’s contention that Jefferson consistently supported severe limits on the powers of the federal government were his actions during the trial of Aaron Burr for treason. Despite the claims of the prosecution, Chief Justice John Marshall, the presiding judge at Burr’s trial, had ruled that there was insufficient evidence to sustain an allegation of treason and consequently reduced the charge to a misdemeanor. The result was that Burr was acquitted. Jefferson, who directed the prosecution from the White House, was incensed and called for Marshall’s impeachment. Indeed, he contemplated using his authority to encourage passage of a constitutional amendment severely constraining the power of the judiciary. These, however, amount to minor deviations from Jefferson’s central dedication to the principle that the scope of the government’s activities should be severely restricted, and in the main Bassani’s thesis cannot but strike the reader as correct.

It is beyond dispute that Jefferson embraced the conclusions about the nature and functions of government put forward by John Locke a century earlier. Not only did he regard Locke as one of three greatest men who ever lived, but the Declaration of Independence, the most lucid account of Jefferson’s political views, reflects all the major principles of Locke’s philosophy. All men are born with certain inalienable rights that precede the establishment of civil society and that are ours by virtue of our humanity and are not as a gift of the civil magistrate. The sole function of government is to secure these rights—to insure that we are each permitted to act as we choose, limited only by our not trespassing on the rights of others. Again following Locke, Jefferson argues that once government violates our rights we are at liberty to take any actions we deem appropriate to put a halt to these violations, including the overthrow and replacement of the civil authority. This was the rationale put forward by the American revolutionaries for taking up arms against the British Crown, and this constituted the core of Jefferson’s political philosophy.

A number of scholars have made much of the fact that Jefferson described the inalienable rights that attach to all human beings not as Locke’s “lives, liberties, and estates” but as “life, liberty, and the pursuit of happiness.” They have interpreted this alteration as indicating that Jefferson abandoned the notion of private property as a fundamental natural right. As one historian has maintained, Jefferson’s support for the institution of private property “does not imply preservation of inequality in the distribution of property.” Indeed, he supported its widespread distribution, even were this to require government action. Bassani clearly shows that, not only is there no textual warrant for this conclusion but, on the contrary, on many occasions Jefferson made clear that he regarded private property as sacrosanct.

Why, then, the substitution of “life, liberty, and the pursuit of happiness” for “lives, liberties, and estates”? The phrase comes from George Mason’s Virginia Declaration of Rights, with which Jefferson was familiar and possibly had before him when composing the Declaration of Independence. Mason, an uncompromising Lockean, had written that the “inherent rights” to which all men are born include “the enjoyment of life and liberty, with the means of acquiring and possessing property, and pursuing and obtaining happiness and safety.” There is nothing in Jefferson’s paraphrase of Mason that remotely suggests, as Vernon Parrington contended, that this constitutes “a complete break with the Whiggish doctrine of property rights,” nor, as Arthur Schlesinger argued, that Jefferson meant to imply that the true end of government is to secure the happiness of its subjects.

Historians of American political thought and of the ideas of its Founders owe a great debt to Professor Bassani for his penetrating study of Jefferson’s thought, both for correcting the view that Jefferson distrusted market forces and supported an intrusive government to achieve a more equitable distribution of wealth and for re-establishing Jefferson as the Founding’s chief theoretician of natural rights.

Ronald Hamowy is professor emeritus of intellectual history at the University of Alberta.

The American Conservative needs your support to make articles like this possible. Please subscribe or make a contribution today.