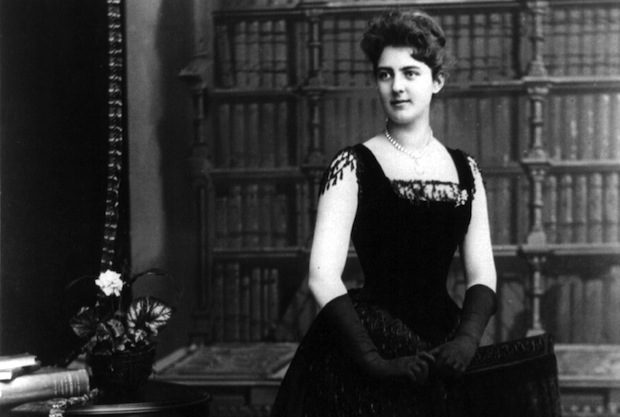 “First Lady” is a title likely headed for the compost pile of history, and as a former First Gentleman (to my town supervisor wife) I say good riddance. It smacks of royalism and misfits a republican people, which I kid myself that we still are.

As First Gentleman I took for my role model dowdy Mamie Eisenhower rather than my contemporary Washington counterparts. With the late Alexander Cockburn, I rather liked Laura Bush in her guise as the pert librarian who, upon being asked by her husband’s imperious grandmother just what she did, snapped, “I read, I smoke, and I admire.” And Michelle Obama deserves credit for the White House garden and for being the only true Chicagoan in the First Couple. But, well, there is the matter of their husbands.

Still, we first spouses have to stick together, so my wife and I drove to Buffalo to take in the exhibit marking the sesquicentennial of the birth of Frances Folsom Cleveland, wife of Grover.

Buffalo produced two of our most pacific presidents: Millard Fillmore, who opposed the Mexican War, rebuffed the Southern Democrat expansionists who wanted to take Cuba, and as a Peace Whig sought an alternative to Civil War; and Grover Cleveland, who in his first inaugural address reaffirmed the Jeffersonian pledge of “peace, commerce, and honest friendship with all nations; entangling alliance with none,” denounced U.S. interference in Hawaii as “disgraceful,” and appointed as secretary of state Walter Q. Gresham, perhaps the most stalwart anti-imperialist diplomat in our history. You’re welcome, says Western New York to an ungrateful nation.

The Frances Folsom Cleveland exhibit, drawn from the collection of political Americana maven Mark Evans, is a multifarious delight on display through September 3rd in the Robert H. Jackson U.S. Courthouse, a glassy cage that stands on the site once occupied by the glorious Erlanger Theater.

Frances, who hated her nickname “Frankie,” was the daughter of Grover’s partner in law and carousing, Oscar Folsom. When Frankie was a child, the corpulent “Uncle Cleve” used to visit the Folsom clan at their ancestral home in rural Folsomdale and play “pitch the apple.” Soon enough he would be pitching woo.

After Oscar Folsom died in a carriage accident when Frankie was 11, Cleveland oversaw the finances of Oscar’s relict and acted as Frankie’s unofficial guardian. A decade later, in 1885, the bachelor President wed his 21-year-old charge, entering a marriage that has, in retrospect, an unsettling Woody Allen-Soon Yi-ish quality.

Frankie’s arrival in Washington relieved Cleveland’s sister Rose, bluestocking and Daughter of Bilitis, of her role as First Lady regent. In Grover’s first year in office, Rose published a study of George Eliot’s poetry. To amuse herself during interminable White House receptions, she conjugated Greek verbs. Once liberated from her chatelaine duties, Rose entered a nearly lifelong “Boston marriage” with a rich widow who addressed her as “my Clevy, my Viking, my Everything.” Rose Cleveland is the answer to a helluva bar bet: Who was the first lesbian First Lady?

Advertisers appropriated Frances Cleveland’s image to sell chewing gum, sulphur bitters, corsets, even liver pills. The Mrs. Grundies disapproved of her low-cut gowns and other displays of pulchritude. She was no Lemonade Lucy Hayes, that’s for sure.

Frances bore a daughter, Ruth, who may or may not have been the candy bar’s eponym. Ruth was born in 1891 and died in 1904. The Baby Ruth was so denominated in 1921, the year Babe Ruth hit 59 home runs for the Yankees. Would a canny chocolatier name his product after the forgotten daughter of a long-gone president or the Sultan of Swat? Will Hershey’s bring out an Amy Carter bar next week?

We motored past the homestead in Folsomdale to pay our drive-by respects to the Clevelands, though our real anti-imperialist homage came days later, when we stood over Mark Twain’s grave in Elmira, New York, his wife Livy’s hometown.

Twain was a vice president of the Anti-Imperialist League. Anent the brutal U.S. suppression of the Filipino independence movement, he proposed that the skull and crossbones replace the stars and stripes.

If Grover Cleveland has faded from memory, Mark Twain has been scrubbed. The Adventures of Huckleberry Finn is bowdlerized or purged from reading lists by censorious presentists, and in the cruelest blow, a Mark Twain Prize for Humor is annually bestowed upon a humorist, or “humorist”—Ellen DeGeneres and Whoopi Goldberg have won the damned thing—who is sufficiently macerated as to threaten no one. The ceremony is held at the Kennedy Center, whose gift shop sells replicas of another First Lady’s tasteful faux-pearl necklace. I’d rather buy Frankie Cleveland’s liver pills.