Let’s be fair. Not everything in Tony Blair’s girlish memoirs – he wrote them himself – is as risible as the exclamation marks and verb-free sentences might initially suggest. A second glance reveals one or two good things. Who knows what one might feel if one actually got to the end of A Journey?

I liked (indeed rather admired) this:

I still keep in my desk a letter from an Iraqi woman who came to see me before the war began. She told me of the appalling torture and death her family had experienced having fallen foul of Saddam’s son. She begged me to act. After the fall of Saddam she returned to Iraq. She was murdered by sectarians a few months later. What would she say to me now? 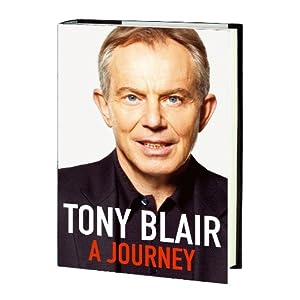 That paragraph comes at the end of Blair’s 140-page section on the war – the book runs to almost 700 pages – and the question he asks is clearly not rhetorical. He simply doesn’t know what she would say, because he can’t know. He makes as good a case for the Iraq war as I have ever come across, but his case is still bad. There were no WMD – and he knows it. So he goes subjective on us. “All I know is that I did what I thought was right.” To Blair that is the clincher, but to everyone else it is ludicrous. We are judged by our actions not by our thoughts. Stalin believed his was doing the right thing in 1939 when he invaded Poland, but most people would now agree that he was wrong.

With the best will in the world, I find it impossible to hate Tony Blair. I liked him at our first, and only, meeting in the early 1990s. He struck me as being moderate and sensible. Alas, not many years later, as Prime Minister, he went global, first siding with the Muslim bandits in Kosovo, then bombing Muslim bandits in Iraq. His stock rose in the United States, but fell here, never to recover. So loathed is he now that, according to a recent poll, 37 per cent of Brits believe that he should be tried for going to war with Iraq; and the launch party for his memoirs had to be cancelled because the antiwar crowd (now made up almost entirely of jihadis and revolutionary socialists) were going to demonstrate outside the venue, the trendy Tate Modern art gallery on the Thames

If you are not careful you can find yourself feeling sorry for the former prime minister. He wants to be taken seriously as a man, but like his pal George. W. Bush (to whom he is admirably loyal) invites only derision. For example, he now tells us that when the going got tough in Downing Street, booze became a “prop.” Why, he would drink a cocktail and have a couple of glasses of wine with dinner, sometimes even half a bottle. How we laughed in Fleet Street. As the wife of every soak knows, that’s the sort of drinking drinkers do when they are not drinking.

What’s he like in the bedroom? You don’t want to know, but Tony tells you anyway. When the Labour leader John Smith died in 1994, Blair knew he had a good chance of succeeding him, and was therefore a bit on edge. That night, he writes, “I needed that love that Cherie gave me, selfishly. I devoured it to give me strength, I was an animal following my instinct…” So shy-making.

Tony Blair rocks, too. “What can I say about Bob?” says Blair of Bob Geldof.  “He can drive you completely nuts. He can talk forever… However, he has two enormous saving graces: he is smart, and he is brave.” It’s not just singers, either. Blair is an all round star-lover, with a vocabulary to match. Kevin Space, the elegant and fastidious artistic director of the Old Vic, is described by Blair as “a really fun guy.”

But Blair knows that there is more to life than fun, and he takes his new job – saving the world – very seriously. He is a jet-setting multi-millionaire savior, a statesman without a state.  A Journey can be read as his prospectus. The Blair Brand is an enormous undertaking. As well as being the unpaid Middle East Envoy, Blair runs a bunch of “halo” companies: the Tony Blair Faith Foundation, the Tony Bair Sports Foundation and the Blair African Governance Initiative. These days he spends much of his time away from England schmoozing foreign potentates. In the words of Fraser Nelson, editor of the Spectator, Blair has set himself up for “a political afterlife that has all the trappings of office but none of the traps.” You’ll be seeing a lot more of him.

Even the Brits may get a glimpse of him this week when he attends the speech His Holiness is giving to politicians in Westminster Hall. Rumors had been circulating that the two men would meet privately, and even that the Pope would give Blair a medal for his services to peace. They turned out to be unfounded, praise the Lord.

Blair must be a puzzle to the Pope and to just about everyone else in the Holy See. Last year a Vatican official described the Tony Blair Faith Foundation as “messianic” (but not in a good way). Also puzzling to Rome is Blair’s apparent enthusiasm for artificial contraception and embryonic stem-cell research (not to mention pre-emptive war). When Barack Obama called on the Pope last year he was given a copy of Dignitas Personae, a Vatican document on bioethics and human dignity. Blair could do with a copy, too. But if the Pope were ever to meet Tony again – they have met before in Rome – he might give the former PM a penny catechism. It’s high time that our messianic former leader understood what he let himself in for three years ago when he “Poped.” What does it profit a man if he saves the whole world but loses his soul?

But if we keep pushing we may not be able to assess their capabilities either way. Here's why.
Scott Ritter January 27, 2020