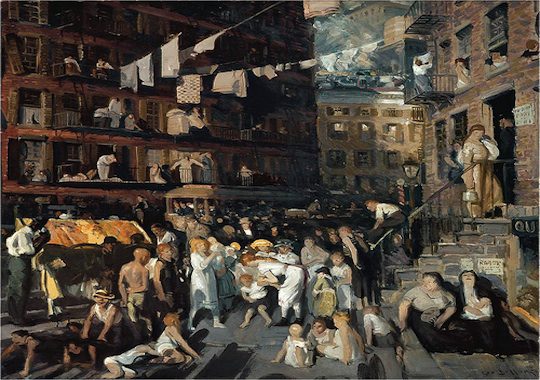 Jack London could understand fascism, George Orwell wrote, because of London’s own “streak of savagery”: “With his love of violence and physical strength, his belief in ‘natural aristocracy,’ his animal-worship and exaltation of the primitive, he had in him what some might fairly call a Fascist strain. This probably helped him to understand just how the possessing class would behave when once they were seriously menaced.” The George Bellows retrospective at the National Gallery of Art, showing through October 8, makes a case for Bellows as the Jack London of painting: Many of his most striking works move along the spectrum of our responses to violence, from attraction to horror.

Bellows was born in Columbus, Ohio in 1882. He, like Edward Hopper, was sometimes associated with the “Ashcan School” of painting, because of his many realist paintings of New York slum life. His 1907 sketch “Dogs, Early Morning” shows spraddle-legged stray dogs picking through an actual ashcan. Hopper and Bellows both painted New York cityscapes and upstate shore scenes, but in many ways they’re opposites. Where a prototypical Hopper painting shows either a detached, cool scene viewed from far off, or a woman caught in a moment of sudden stillness as she stands by a window, a Bellows city painting gets down into the grime of the gutter, and his best-known works often portray men in turbulent motion. Hopper’s paintings often suggest the inbreaking of the transcendent, while Bellows’s are more often resolutely immanent.

Bellows initially gained fame for his paintings and ink sketches of low-rent New York life, like 1913’s “The Cliff Dwellers,” in which the cliffs of the title are gray tenements. He also produced formal portraits of poor children: In “Paddy Flannigan,” a young boy whose white shirt is in tatters gives the viewer a hooded, proud, assessing gaze, while in “Little Girl in White (Queenie Burnett),” a laundry girl from Bellows’s building looks at us shyly with giant black eyes, her blouse pulled childishly out too far over the waistband of her skirt. In 1911 Bellows began to work for the socialist journal The Masses, but his art lacks the sense of undifferentiated, impersonal suffering called up by terms like “masses” and “lumpenproletariat.” His poor people don’t just exist to prick the consciences of the bourgeoisie; they play and scrap, scold and gawk.

And they fight. When Bellows began to paint boxing matches, prizefighting was illegal in New York; legal boxing was limited to members-only clubs. Bellows created some of the most memorable images of this disreputable, ferociously visual sport: In “Club Night,” the attacking boxer is coiled like a cobra as he lays into his contorted opponent. The power of his strike distorts the attacker’s body line, making him seem inhumanly elastic. In “Both Members of this Club” (one of several Bellows works which take black people’s struggles and individuality as seriously as whites’), the black boxer swoops toward a red-faced white opponent like a vampire going in for a bite. Bellows had an affection for extended, lunging poses throughout his career, and his boxing paintings are startlingly kinetic and visceral. When the ref grabs the rope in “Counted Out, No. 1,” you can feel it scratch your own palm. But the paintings are also intimate and sympathetic; “Counted Out, No. 2” shows the pity on the face of the referee and the exhaustion and even regret of the winner, as they stand over an almost fetally-curled losing fighter.

Bellows used the same visual vocabulary for his pictures of football matches and, more insightfully, for his sketches and paintings of evangelist Billy Sunday leading a revival tour. The “Sawdust Trail” series shows the cartoonized audience and the lunging, combative preacher. Bellows made no secret of his dislike of Sunday’s religious style (which he called “death to imagination, to spirituality, to art”), and he shows the backstage maneuverings which make the revival into a form of entertainment. But Sunday’s fiery charisma makes him a compelling figure, not a villain or a joke.

Bellows was capable of much softer work. He loved to work with deep, drenching blues, as in “Blue Snow, The Battery” or the luminous “Easter Snow.” He often picked up bright, noticeable blues or greens in many different areas of a painting, but these visual echoes come across as charming rather than garish or strenuous. He painted many gentle portraits of his wife, Emma, although the examples in the National Gallery’s show do seem a bit slack in comparison to his portraits of poverty or violence. (The best family portrait in the show is an allegorical one, in which a younger version of Bellows and Emma portray a fisherman and his wife walking along the seashore; a determined-looking Bellows carries his little daughter on his shoulder as an apocalyptic, reddened sky churns behind them.)

In 1918 Bellows created a series of works depicting German war atrocities in order to stir outrage and embolden America in World War I. These paintings are astonishingly accomplished, expertly choreographed and blocked for maximum horror. There are children spitted on bayonets, a boy having his hands cut off, a torturer relaxing with a cigarette in front of his shackled and contorted victim. In “The Barricade,” a line of naked human shields appears as if dancing in front of their uniformed, inhuman German guards. The victims lift waving hands on high, so they’re totally unprotected, while the Germans hunch in the background, in front of pastoral trees and sky. The Belgians are people but the Germans are brutes: It’s a totally effective piece of propaganda, evoking a powerful mixture of pity and rage. The painting seems to demand violence in response.

Of course, even the worst of the fabricated atrocity tales of World War I would soon seem to pale in the face of reality. “Return of the Useless,” depicting Germans unloading sick and disabled labor-camp prisoners from a rust-red boxcar, was painted during the First World War but caused understandable shock when it was exhibited in New York during the Second, a war in which Germans and boxcars were being turned to even grimmer purposes. The painting is more than its politics: He creates characters rather than stereotypes, and the red of the boxcar is picked up throughout the painting, in the red face of one soldier and in the scraped, abraded flesh of the prisoners.

Eve Tushnet is a contributor to TAC‘s State of the Union blog. She also blogs at Patheos.